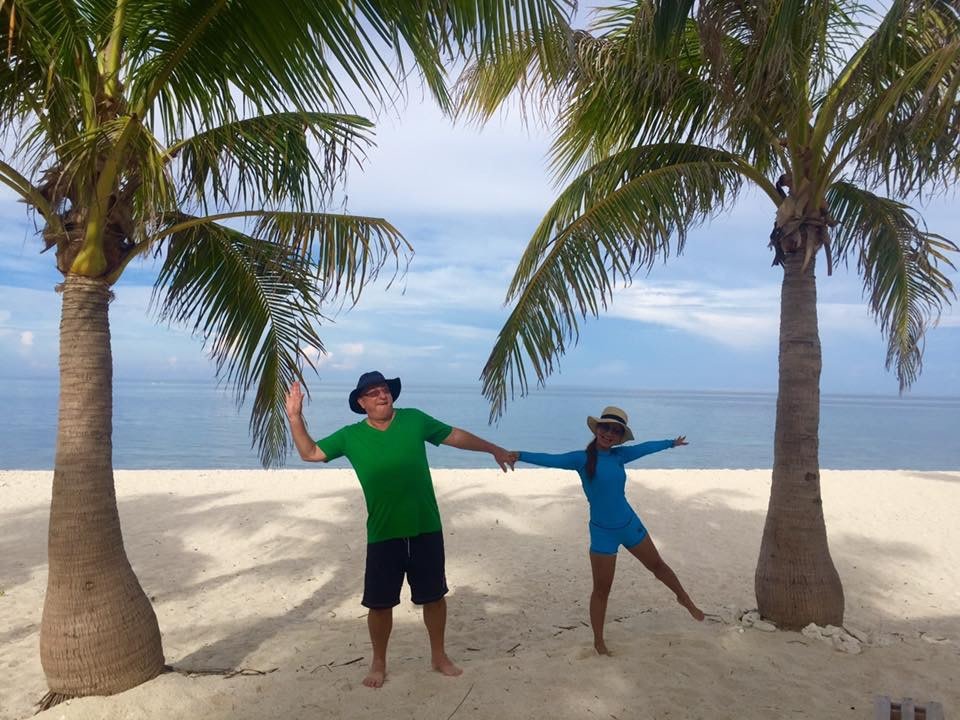 That Time We Went Off The Grid

In this post I describe That Time We Went Off The Grid in the Philippines and you can discover how to do it too!

We were picked up in a minibus at our hotel in Iloilo Philippines early on Wednesday morning.  Armed with snacks and drinks we settled in for a 3 hour drive to the boat harbor where our outrigger boat would be waiting to take us to

Isle Gigantes where we would spend 3 days without internet, without phones and with very minimal electricity.

We all felt a little bit of dread but we had all seen the photos of these amazingly beautiful tropical islands so we figured it was going to be well and truly worth it. (spoiler alert: it was definitely worth it)

When we arrived on the wharf we were greeted by a crowd of people.  Some of whom were the people running the tour.  Everyone was super friendly.  They ushered us out of the minibus and insisted we leave our bags and that the guys would load them onto the boat.  Meanwhile we should come and sit in the shade and have something to drink.

After sorting out the money side of things we were directed to the boat and off we went.  The day was lovely, nice blue sky, calm sea, light breeze.  Under instructions from the skipper we wore our bright orange life jackets, even though it is nearly impossible to sink or capsize these boats.

After an hour of sailing we arrived at an island which was on the way to ours.  The boat stopped as it ran out of water very close to the beach.  A plank was put down and we unsteadily scampered down to the beach.  It was not the white sand I’m used to in Australia but broken up coral. Coconut trees waving from the edge of the beach made it very picturesque.

We went for a swim while the crew and our hosts prepared lunch.  The warm tropical water was crystal clear and so refreshing.  Tiny fish could be seen flitting around our legs.

Theary displaying one of the many crabs

Soon lunch was ready, I doubt many westerners have ever seen anything like this and it’s going to sound like an exaggeration; there were dozens of large fresh crabs and then another heap in bowl of a mild curry.

The food was amazing in both taste and quantity; I can tell you that each of these crabs would cost at least $60 back in Brisbane. It’s amazing to see but we ate it all.  A dog was hanging around me at the table and hungrily ate any scraps including the crab shell whenever I dropped a morsel in his vicinity.

In about 10 minutes our island came into view. The harbor was guarded by a reef which can only be seen at low tide.  Fishing boats were dotted all around the harbor and even more were up on the sand in various states of repair.

Our hosts led us to our compound which consisted of half a dozen huts and a communal eating and relaxing area.  By that I mean it had some handmade tables and bench seats which were reminiscent of hastily made saw horses.

panorama view of the living area of our camp

A few of us went for a walk after we had all been assigned a hut.   We found the village to be full of the friendliest people on earth.  Everyone was intrigued to see these three white guys wandering around their village but no one was worried, they all waved and the kids all said hello.  It was really nice.  We stopped at some little shops and bought some bananas and some barbecued corn on the cob.

Time for some drinks so we went back to the dining area under a makeshift tent.  Now that it was getting dark the generator was turned on and so we had some light and fans.  There were no other electrical appliances.  I produced a bottle of Johnnie Walker Double Black.  Magically some cups and ice appeared, which made it all very civilized.

Theary sent me off for a shower which was an enclosure with no roof.  The shower or more accurately “bathing area and toilet” The toilet flush was a scoop of water and the shower was the same scoop tipped over one’s head and body.  This is roughing it folks, but refreshing nonetheless.

After a dinner of spaghetti made in the Filipino manner which is incredibly sugar laden and not to my taste, we went back to the beach.  We built a fire on the beach.  A bunch of kids came by so we gave them some marshmallows to toast.

We “adults” decided to try the working man’s beer.  It’s called “Red Horse” beer.  This was my first time so it was a bit of a surprise, it’s drunk with a fair bit of ice so that its really cold.  Its nearly 8% alcohol so it’s pretty strong for beer and I might add it goes down a treat!

We were all pretty tired as it had been a long day and an even bigger one was promised for tomorrow.  I’ve been in the tropics for over 5 years now but admit it was very difficult to get comfortable with just a fan.  I discovered during the night that the generator was not producing a very stable electricity supply.  It must have been surging and dropping.

The silly fan in our cabin was not your basic electric one, they had opted for a fancy pants electronic one.  As soon as the voltage dropped the fan turned itself off and would not restart.  So of course, I would wake lathered in sweat.  The lights outside the cabin in the dining area were also electronic like all lights these days and would dim and then flare up in tune with the generator.  No switches could be found.

So at 3am I went out to the dining area.  Weird surreal time for me; sitting there alone with only an occasional cat wandering through the camp for company.

using a rope to climb the mountain

Mind you one of the crew was sleeping peacefully on a bench.  I was kind of jealous as I knew I would be tired in the morning.

A little before dawn I went back to bed and crashed out for a nap and got up in time for breakfast of coffee.  Our hosts prepared, fried eggs, some quite chewy and sour cupcakes and some sweet cakes.  The coffee was enough for me.

It was then announced that the first activity of the day was to climb a mountain in order to clamber about in a cave.  Everyone in the group knew not to even bother asking if I was going to come along.  So as they marched off on their mountaineering safari, I headed back to bed.  It’s amazing how fast I can fall asleep sometimes, not often enough I might add.

About an hour later I woke up refreshed, went out to the dining table and made another coffee and settled down to read a book.  Absolutely highly recommend this book by Dan Kennedy  It’s called “No BS Guide To Direct Response Social Media Marketing”

Just as I was getting settled one of our party came dashing into the camp clearly in a distressed condition.  Quickly it was established that she had been attacked by some sort of jelly fish with tentacles.  Her lower leg had ugly red welts all over it and the venom was causing considerable pain.

Some of the staff began pouring what appeared to be bleach onto the wounds.

This had all happened after they had climbed the mountain and explored the huge cavern and cave.

Then rather than return the same way, they opted to climb down to the water via the jungle and wade back in the water.  That’s when the dreaded jelly fish attacked!!

Soon the rest of the party returned and we learned that Theary had also been attacked and had similar welts on her leg.  My mate, Patrick had carried her about a kilometer in the water.

Anyway after a fairly short time their  pain was mostly gone and we boarded the boat for another island. This island contained a hidden lagoon just like you see in the movies.  The boat was pulled alongside a rocky outcrop and we clambered ashore.  The island was very rocky and had a clearly volcanic origin.  We climbed unsteadily (well me anyway) over a dozen meters of rocky track until the lagoon was revealed.

don and theary at the lagoon

The lagoon was clear, emerald green and super refreshing to swim in.

the whole team n the lagoon

Next stop was another island for more seafood lunch!

This was a very small island with a few huts, some stray dogs and some cliff jumping spots. Of course the giant spread of crab and other assorted seafood was laid out for lunch again.  I reckon we must have eaten $1,000 worth of crab.

After lunch and another swim we jumped aboard and headed to the jewel in the crown.  This island has a small hill naturally carved from rocks.  It’s a bit of a climb but well worth it as it gives a fantastic view of the entire island and is fantastic for photographs.

gigantes island, the most spectacular view

What was the cost of this epic adventure?

Dear reader, I’m going to reveal how much this adventure cost and I hope you are sitting down and don’t end up throwing something at your computer screen.  Allow me to recap what it included.  Transport, 3 hours each way from our hotel to the boat, 3 days of boat trips, 2 nights of accommodation, 7 islands, all meals and drinks.  Best of all was none of us ever had to lift a finger, no bag carrying, no cleaning, no cooking, no washing up, nothing.

The whole thing cost us P4,400 (Philippines Pesos) which is about $US100 each.   Yep a measly 100 bucks.  I’m willing to bet you were thinking this was going to cost us a truckload of money right?

This was an epic adventure and my poor writing skills do not do it justice.  This was something we will all remember for the rest of our days and it was so incredibly cheap.  There are adventures like this going on all over the world all the time and they do not have to break the bank.

Here’s some excellent business builder places you can get started to speed up getting to your dreams:

Get your passport, your swimmers, snorkel and join us on the beaches of the world.

I hope you enjoyed this post and got something useful form it.  If you did please click the 5 star rating just below here and consider leaving a comment and sharing on Facebook.  That really helps a lot and shares the information with your friends and associates.

What To Say To Your Pre-called MLM Leads